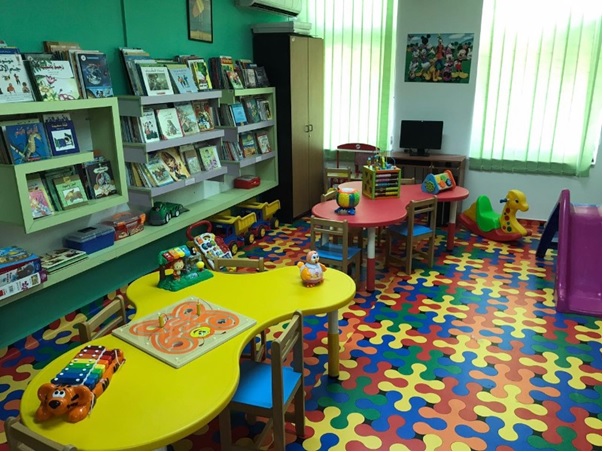 Ramallah - Alhayat Economic- The National Beverage Company Coca-Cola/Cappy (NBC) provided a donation to renovate the recreational room at the children’s paediatric at Al Makassed Islamic Charitable Society Hospital in Jerusalem. The donation included the provision of furniture and supplies for recreational events, including a TV and story books, as part of its continuous initiatives to support the furnishing of the children’s libraries in a number of hospitals and childhood centres in the West Bank and Gaza Strip.
Mr. Imad al-Hindi, General Manager of NBC, said that the donation was part of a series of donations provided by NBC to renovate the children’s libraries in the different hospitals in Palestine.  The room was provided with a group of children’s stories and books, in addition to educational and recreational toys.  He added: “our efforts in Al Makassed Hospital are only a small part of our duty toward Jerusalem and its national institutions, especially the medical institutions which provide medical services to the citizens, especially to the children who need special psychological and educational care during the treatment.”
Mr. al-Hindi affirmed NBC’s commitment to continue supporting all the hospitals nationwide with children’s educational and recreational sections, out of its recognition of the importance of such libraries which include children’s stories and toys.  He noted that NBC donated 11 children’s libraries; 3 in Gaza Strip, 2 in Ramallah, and one library in each of Beit Jala, Jenin, Jerusalem, Hebron, Qalqilya, and Tulkarm, out of the attention of the NBC’s Board of Directors and Management of developing and supporting the medical sector in Palestine and supporting the projects that specially target the children.
In turn, Dr. Rafik El Hosseini, General Manager of Al Makassed Hospital thanked NBC’s Management and valued its continuous support to the hospital. He noted the importance of renovating the children’s library which was founded in 1997 and included the first recreational room for children in Palestine. He added that NBC took part in developing the room in 2012. El Hosseini noted that children need psychological and education follow-up while they receive treatment in the hospital and that the recreational room lessens the burdens of the nurses who provide children with medical care.  He pointed out that Al Esrar 2 School was opened within Al Makassed Hospital last April under the Education Minister’s appreciated initiative as the school aims at helping the children to continue their education during the medical treatment.
Ahmad Jadallah, Head of the Social Service Section at Al Makassed Hospital indicated that the children’s recreational room provides a friendly climate for play and education, as well as to communicate with the children who suffer health problems. The room also hosts the recreational events organized by the Social Services Section on the various occasions. He pointed out that the children find shelter in this room away from the distress of diseases and pains.