Gaining the 1st and 2nd position, National Beverage Company Coca-Cola/Cappy and INJAZ announce Hebron and Birzeit Universities as the winners of “Ripples of Happiness" Program 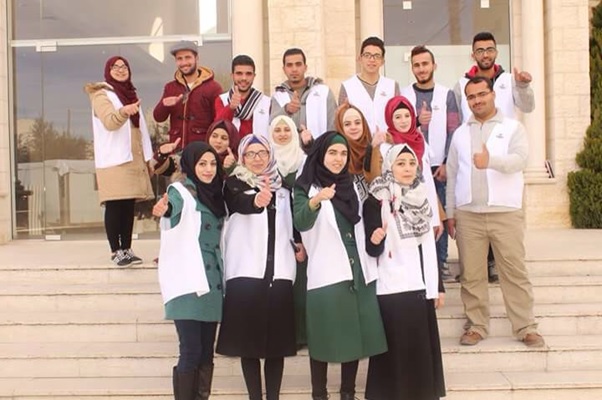 Ramallah-Alhayat Economic- Coca-Cola Foundation and INJAZ Al-Arab, organizers of Ripples of Happiness Program, announced Hebron and Birzeit universities as winners of the first and second places in the 9th season of the Program at the Arab region level.
The Hebron University team came in the first position and won a $10,000 scholarship from the Coca-Cola Foundation for its project “Take a Break” as they received training from Mahmoud Sinokrot, from Premium Consultations Firm in Hebron. The project is a smart application that sends notifications to all the subscribers if they use their cell phone for more than one hour.
Dr. Salah Zaru Al Tamimi, President of Hebron University, said that the University’s administration is proud of its students’ accomplishments and coming in the first place for developing the application which aims at minimizing the risk of electronic addiction, the health and psychological problems and traffic accidents arising from the excessive and bad use of the Social Media and enhancing the social and family bonding. Al Tamimi thanked INJAZ for delivering programs that aim to create a positive interaction between the youth and their local community.
The team of Birzeit University came in the second position and received a $7,000 scholarship for their project “Eureka” which means “I have found it”. The students came up with the idea of Eureka and it was launched under the support and direct supervision of the Cooperative Work Section at the Deanship of Student Affairs and the team received training from Manar Zitawi, from Jawwal Co. Eureka aims at discovering the talents of the Palestinian children regardless of their health or physical condition to develop such talents and connect them with professional entities to use them in reality.
Mr. Mohamed Al Ahmed, Dean of Student Affairs at Birzeit University, congratulated the students for such achievement and said: “We have faith in the positive potential of Birzeit University students and we seek to unleash their creativity which can bridges the gaps existing in the community and effectively interact with them to bridge such gaps by coming up with pilot projects that improve the social and cultural living standard”.
On his part, Mr. Imad al-Hindi, General Manager of the National Beverage Company Coca-Cola/Cappy (NBC), congratulated the winning university teams in Palestine and expressed pleasure and pride of NBC’s Board of Directors and Management for the achievements of the Palestinian universities year after year. He affirmed that the persistence of the Palestinian students to come in the first places, present the best projects and initiatives which aim at serving and empowering the community increases the NBC’s insistence to continue supporting the students and the youth and provide them with more opportunities to gain further practical experience, encouraging them to uphold the teamwork spirit, and assisting them to turn their ideas into concrete reality.
Mr. al-Hindi said he is proud of the creative partnership between NBC and INJAZ Palestine, and he affirmed the importance of cooperation between both entities to serve the best interest of the young and youth groups in Palestine. He valued the important role of INJAZ Palestine which pursues programs and initiatives which aim at refining the talents and opening the minds and mental perception.
Randa Salama, General Manager of INJAZ Palestine, said she is pleased for Palestine winning the first and second places among the Arab nations which participated in the Program. She added: “Palestine takes over the first places throughout the various seasons of Ripples of Happiness Program with creative and innovative ideas that contribute to handling the deficiencies in the society which indicates that the Palestinian students have the ability to succeed if they have the right opportunity and directions, which we seek to achieve through the various programs introduced by INJAZ.
Salama commended NBC’s role for its continuous support to INJAZ in general and Ripples of Happiness in particular. She also praised the volunteering trainers who contributed with their time and efforts to make the Program successful and to enable the students to present pioneering initiatives to serve the society. It is worth mentioning that the 9th wave of Ripples of Happiness Program was launched in last September at the same time it was launched in a number of the Arab universities and colleges in the Kingdom of Saudi Arabia and Palestine. More than 313 students from 13 secondary schools and universities in the region participated in the 9th wave. The judges included representatives from Coca-Cola, INJAZ Al-ARAB, Mastercard, and Credit Agricole.
The Saudi university Dar Al-Hekma came in the 3rd place for its innovative project “Awareness” and it has received a $5000 scholarship. Ripples of Happiness Program aims at training the university students on planning, organizing, and funding social responsibility projects in their communities to make a positive change, learn the social communication arts, work with a team, gain IT, marketing, and public relations skills, and familiarizing them with inspiring examples of uplifting the capacity to perform projects that will have a positive impact on their domestic communities.