Funded by National Beverage Company Coca-Cola/Cappy: the Economic Media Forum in Gaza celebrates the conclusion of its first specialized courses 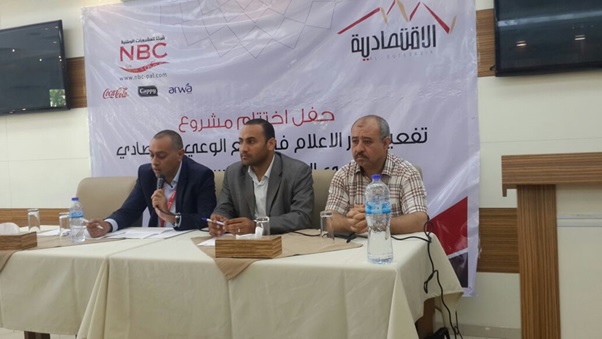 Gaza- Al Hayat Economic – the Economic Media Forum in Gaza concluded the activities of the first training program specialized in Economic Media, which was funded and sponsored by the National Beverage Company Coca-Cola/Cappy (NBC).
The program, which continued for two months, targeted elite of media workers from 30 different media establishments in Gaza Strip, with the objective of filling the gap and meeting the pressing need for specialized media and essential expertise required to provide high quality and professional media content.
The program activities included direct training, conferences, field visits, reports as well as training on specialized media writing approaches by media professionals, under the close supervision of a group of expert instructors.
The Head of Economic Media Forum in Gaza, Mr. Mohammed Khalid Abu Jayyab stressed during his speech at the closing ceremony of the project, on the paramount and vital outcome of the project demonstrated and reflected soundly in the inimitable performance of the media participants, via the significant amount of economic principles, terms and expressions attained, as well as the specialized economic skills gained, the professional basis demonstrated and manifested intelligibly in the economic reports introduced by the participating media in the course.
He also praised the generous patronage and support of NBC for such programs and projects, and the significant effects thereof in advancing, honing and enhancing the capabilities and competences of the press and journalists and thereby promoting their participation in the economic development of all the governorates in the Homeland.
Abu Jayyab emphasized that, the main objective of the training program was to encourage and boost the substantial role played by the local media in the construction of public opinion and guiding the Palestinian society, to the extent of empowering them to tackle and deal with different economic issues of the society professionally, objectively and accurately, and thus promoting their role in raising the economic awareness of all the Palestinian public.
Besides, he indicated that this project came as a flagship activity and the first project of Economic Media Forum launched by Al Eqtesadia newspaper, and that the Forum shall shortly undertake some visits, meetings and dedicated seminars in the economic affairs, with the objective of establishing, promoting and endorsing professional relations between the media and different economic sectors at Homeland.
On the other hand, the General Manager of NBC, Mr. Imad al-Hindi highly praised the initiative of the Economic Media Forum in Gaza, and highlighted the constant keenness of NBC management to nurture and adopt creative initiatives and productive concepts, with the aim of developing and empowering Gaza society, as well as attaining the human and economic development for all segments and categories of the Gazan society.
Mr. al-Hindi also pointed out the unceasing and tireless endeavors made by the company for supporting and sponsoring all the activities and programs at all the Palestinian Governorates, on the path of attaining and realizing the aspired and highly sought cooperation between the official and local entities and the private sector in order to produce a better and rewarding future.
Mr. al-Hindi congratulated all the media people participating in the first training program, and highlighted the significance of adhering to the ethical responsibility toward their societies in term of economy awareness and participating in drafting and developing future plans aspiring to promote the local economy. He assured that the sponsorship of such project came in line with the company activities with respect to the company social responsibility and its definite keenness on contributing in developing, enhancing and promoting all the sectors in the Palestinian society.
On his part, NBC Branch Manager in Gaza Stripe, Mr. Yasser Arafat in his speech at the closing ceremony, stressed on the awareness of the company management to the significance of a professional, specialized and expert media and the indispensable role thereof in the sound construction of genuine economic growth and progress in close cooperation with all the economic institutions.
In conclusion, Arafat extends thanks and appreciations to the management of Economic Media Forum and Al Eqtesadia newspaper as well, for all the efforts and attributions made by them in organizing this course, wishing them and the participants more success and everlasting prosper.