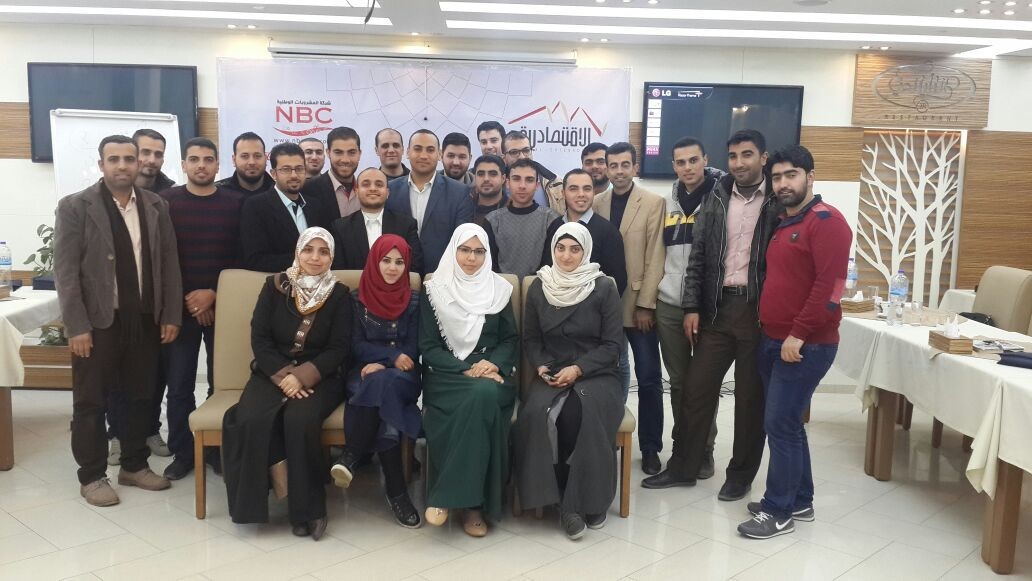 Ramallah – Al Ayyam –
The Economic Media Forum of Gaza has completed the first phase of the first specialized training program on economic affairs provided for journalists working in the media institutions in Gaza Strip. This program is implemented under the project of activating media role in raising economic awareness in community, which is sponsored by the National Beverages Company Coca-Cola /Cappy (NBC),
The Forum Chairman, Mohammed Khaled Abu Jayyab, stated that “this program mainly aims at educating media people on economic concepts and terminology, providing them with the skills required for writing professional economic reports”.  He pointed out that the central role played by the local mass media in forming the public opinion and guiding the community necessarily requires the journalists to efficiently address the community’s various economic issues in a meticulous, objective and professional manner.  This may further enhance their role in raising the public’s economic awareness and achieve active partnership and effective contribution to the sustainable development in Palestine.
“The State’s economic bodies, both private and public sectors, are in a dire need for effective specialized economic media to help achieving sustainable development with the involvement of the various community sectors” said Abu Jayyab.  He stated that the one month second phase of the program will include many visits, interviews and seminars on economic affairs. It will aim at providing the trainees with several academic and practical skills and experiences in the area of economic journalism. It will also include a set of specialized events, seminars and workshops to integrate media people into the economic domain, thus ensuring continuous and mutual cooperation between media and economic sectors.
NBC General Manager, Mr. Imad al-Hindi, congratulated the training program developers for the first phase success, emphasizing the Company’s interest in supporting the media sector, especially the activities that involve collaboration between the media and the economic sector, being one of the main pillars of building the State and developing the society.
He also highlighted that the Company’s sponsorship for this specialized program comes in line with NBC role in supporting the activities which aim at establishing media capacities within the journalists and raising citizen’s awareness on economic conditions, as well as making them aware of laws, rights and duties.
He also underscored the Company’s commitment to its social responsibilities towards all sectors in Gaza Strip. Such responsibilities include implementing a creative initiative to enable unfortunate groups and achieve the desired development in the community of Gaza.
He praised the efforts of the Economic Media Forum to implement specialized training programs and seminars, hoping that these programs will target a huge part of media people in Gaza. He also highlighted the important role of the professional journalists’ reports and researches in introducing citizens to the economic conditions, especially under the critical circumstances faced by our families in Gaza Strip.
Program participants commended the academic and practical expertise and skills they gained through that training by the most professional trainers in Gaza. They also praised the National Beverages Company support to the program, highlighting the role of the Forum, which represented 30 different media institutions in Gaza, in consolidating and developing the specialized media efforts in economy as well as building professional expertise to serve the Palestinian community and achieve a real economic development