Al-Hindi: We congratulate the "valorous girls" of the Sareyyet for being crowned champions for the fourth time Claudet Salama: We are Proud of NBC sponsorship of our Team 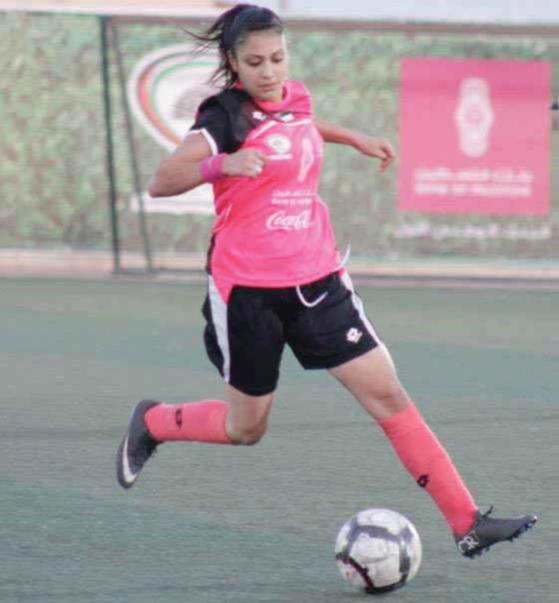 Jerusalem- Palsport News Agency- Claudet Salama, leader of the First Sareyyet Ramallah, expressed her happiness on winning the title of Women's Football League for the fourth time after the tie score in the final match the second runner, Deyar Bethlehem Team, with two goals for each, where Salama scored the first goal for her team. "Sareyyet deserves to be crowned and to win the title following their dedicated efforts over the past period, so winning the league was the natural result, although we did not give the required performance in the final match," said Salama.
Salama extended thanks and gratitude to the National Beverage Company Coca-Cola/Cappy for sponsoring and supporting Sareyyet women's soccer team for a long time, which is the only national company supporting the women's soccer team in the Sareyyet in particular, therefore NBC deserves thanks for their  generous sponsorship.
"The Management, players, and fans of the Sareyyet are proud of this leading national company which maintained its support and sponsorship of the Sareyyet women's soccer team through to winning local championships. Hopefully, we will take part and win Arab and international leagues," added Salama.
On his, Mr. Imad al-Hindi, General Manager of the National Beverage Company Coca-Cola/Cappy, commended this achievement as he congratulated the "valorous girls" of the First Sareyyet Ramallah. He confirmed that since inception, NBC partnered with the Palestinian national sporting, youth, social and health institutions, which improved and developed the Palestinian sports in terms of women's sports or youth sports sponsored by NBC through Palestinian clubs. Moreover, Mr. al-Hindi congratulated Sareyyet team for winning the women's soccer league title for the fourth time in a row.