Supported by the National Beverage Company, Palestinian "Mawaheb Al-Taif" Team gears up to play for the first time in the Copa Coca-Cola Football Championship in Germany 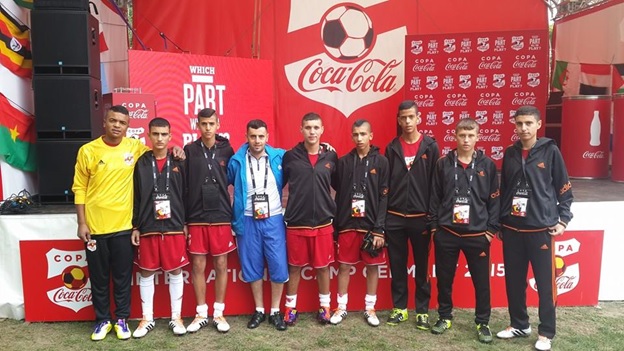 Ramallah- Alayyam:  The junior football team, Mawaheb Al-Taif, left the country heading to Germany through Jordan to take part for the first time in the Copa Coca-Cola International Football Championship, which is organized by Coca-Cola in most countries of the world where the company operates.
Mawaheb Al-Taif players are getting ready to take part in the Copa Coca-Cola games, which will be organized in Berlin on Wednesday with 16 junior football teams taking part from different parts of the world.
Mawaheb Al-Taif Team was qualified to take part in the international Copa Coca-Cola Championship after defeating Nablus Education Directorate Team in the playoff with penalty shoot-outs in the local championship Copa Coca-Cola Palestine, which was organized by the National Beverage Company Coca-Cola/Cappy (NBC), in collaboration with the Ministry of Education, for the seventh year in a row. This year, NBC decided to allow the local junior teams to take part and compete on the title at the level of Palestine.
None of Mawaheb Al-Taif players whose ages range between 12 and 15 could have imagined getting this opportunity, as their daily activities were restricted to training and playing in the local competitions on poor playgrounds and with limited resources.
About Mawaheb Al-Taif taking part in this championship and going through this experience, Ahmed Abu Kishk, Captain of Mawaheb Al-Taif, says: "we have gone through a powerful and interesting competition in the playoff against Nablus Education Directorate team. We managed to win, thanks to the efforts of Coach Hosni Assaf and Captain Emad Abu Kishk, as well as the players' excellent performance".
Abu Kishk added: "the moment we were announced as winners and received the Cup was a very happy moment that will be recorded in the history. I am so glad of winning and travelling to Germany with Coca-Cola and we are thankful to the company for their support. We did not expect we will be able to go to Germany, but we trained well and we are ready to win there".
Player Ahmed Assaf who was awarded the Copa Coca-Cola Palestine Best Goal Scorer award, scoring 14 goals, said about their preparations to the games: "we trained hard and we are ready. God willing we will have achievements".
About the experience of winning in Copa Coca-Cola Assaf added: "we were overwhelmed with joy when we won and learnt that we were qualified to the championship in Germany. I expected to win but I never thought that we will participate in an international championship. I believe it is important to support the youth and football which receives high attention and popularity from the Palestinian youth. We thank Coca-Cola for this initiative which enables us to scout more talents."
In turn, player Obada Sokkar pointed out: "I have never been so happy when I was called to go to Germany with Mawaheb Al-Taif team. We hope to find the required attention in Germany and that the companies and other institutions provide us with support. Coca-Cola provides us with support in terms of the apparel, sports shoes and travel and accommodation expenses."
Player Hossam Abu Kishk was excited expressing confidence in the team's preparations to make achievements and win, especially after the hard training. He said" We are excited to play the matches and we wish to make honorable achievements".
As for Mawaheb Al-Taif formation stage, Captain Hosni Assaf, Coach of the team, pointed out: "We learned that NBC opened registration for the junior team to the local community to take part in Copa Coca-Cola Palestine. This was the beginning, I contacted Captain Emad Abu Kishk and we selected the players based on our previous acquaintance with some of the talented players. The team was registered to take part in the championship. We had powerful competitions with local teams; we won and became qualified to the playoff versus Nablus Education Directorate team which is the winner at the level of Education districts. We had a tough game which was ended with tie 2/2. We played the penalty shoot-outs and we won scoring 3/2.

Regarding the feelings of joy for winning which overwhelmed the players, Coach Assaf said: "joy was beyond any description, especially after the players received the Cup and learned they are eligible to participate in Copa Coca-Cola championship in Germany with 16 teams from different parts of the world". He noted that players were so happy for participating in an international championship for the first time after the continuous training and hard efforts made by the players, especially that the Palestinian players have tougher conditions compared to their peers worldwide.
Captain Assaf commended NBC's efforts and role allowing the youth this opportunity in football. He extended thanks to NBC for supporting the team, whether by coordinating the travelling of the players, supplying them with sportswear and equipment, or covering travel and accommodation expenses in Germany. He hopes that NBC continues such support and that all other companies take after NBC so that the Palestinian juniors can pursue their journey in sports.
In turn, Mr. Imad al-Hindi, NBC's General Manager said that “NBC is proud of the achievements of Mawaheb Al-Taif and that it appreciates Nablus Education Directorate team which demonstrated the youth love and passion of the sport.” He pointed out that NBC was proud of all Palestinian junior talents and achievements, especially that Copa Coca-Cola Championship revealed excellent talents, whether in the youth category at the level of schools and educational regions or at the level of local clubs and teams in Palestine.
Mr. al-Hindi emphasized: "the youth must be followed up and supported in order to embrace them and refine their skills to turn into professional players who raise the name of Palestine in the regional and international sports events. This championship proves that we have too many excellent talents that need support and sponsorship. It will be unfortunate not to lend them a hand, the Palestinian youth have the will to pursue their dreams and they need guidance, mentoring, and support. Through Copa Coca-Cola championship, we hope this will be the real take off of the youth in Palestine. Therefore, we are committee to organize Copa Coca-Cola to scout more and more talents and to provide them with the necessary support".
It is worth mentioning that the Mawaheb Al-Taif winning journey promoted the players and the Coach to start Mawaheb Al-Taif school at Kufur Laqif village at Qalqilya district. According to Captain Honsi Assaf, the school will receive junior players to get training and it will embrace the young football talents.