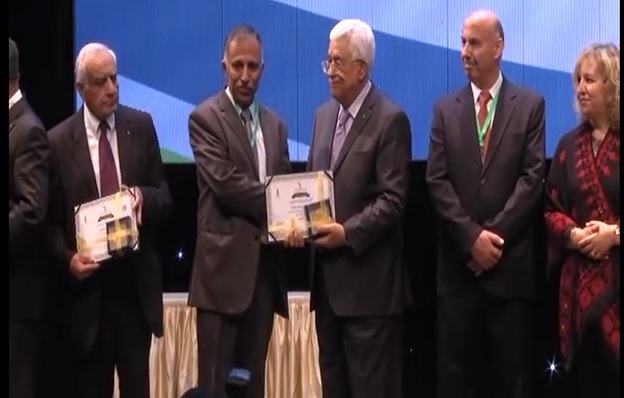 Ramallah – The President of Palestine, Mahmoud Abbas, honored the National Beverage Company Coca-Cola/Cappy (NBC) during the ceremony of launching the 1st National Forum for Innovators in Palestine which was organized by the Higher Council for Innovation and Excellence. NBC was honored in appreciation of its excellence in the rationalization of power and water and in conserving the environment and natural resources in all phases of its manufacturing and production process in its plants, which include Coca-Cola plant in Ramallah, Cappy palnt in Tulkarm, and Jericho Water plant in Jericho.
NBC took part in this ceremony beside dozens of innovators, both individuals and national institutions. NBC presented a summary of its projects aiming at preserving the Palestinian environment, especially by reducing carbon emissions and rationalizing power and water consumption.  NBC presented as well the standards adopted in production and manufacturing, which reflect its adherence with the international specifications and standards and preserving its resources.
The President got acquainted with the leading projects of the Company when he visited the NBC stand in the Exhibition which was organized as part of the Forum.
Mr. Imad al-Hindi, General Manager of NBC, considered the honoring by the President as a medal of which NBC and its staff are very proud.  Mr. al-Hindi extended his thanks to the President’s consideration to encourage innovation and excellence in the various fields, especially the national industries and to promote creative and responsible investment”.
Mr. al-Hindi emphasized the importance of improving the standards of environment preservation and rationalizing consumption of power and natural resources in the various industries and sectors because Palestine faces many challenges in relation to having access to natural wealth and resources and environment protection.
Mr. al-Hindi commended the role of the Higher Council for Innovation and Excellence in organizing such important event, which would encourage the various institutions, companies, sectors, and the Youth to think creatively and to find creative solutions for the problems and obstacles that we all face in Palestine.
NBC embarked upon exploring a project to install solar energy plates in its headquarters.  Such plates will cover 50% of the company’s needs of electrical energy, which we consider as part of our social responsibility in energy preservation.”
As part of its commitment to the environment and consumer safety, he pointed out that NBC puts the environment sector and preservation of natural resource on top of its priorities, noting that with the objective of providing the power consumed in its factories, NBC has adopted many actions and modern technology toward this goal, as it uses power saving heaters. Further, NBC adopts modern approaches that reduce the pressure of pressed air to the lowest level allowed and it uses power saving lightening in the plants, among other creative means to reduce the amount of consumed power.
He went on to indicate that NBC managed to maintain a balance of carbon emissions like the system adopted in the Coca-Cola companies by reducing the carbon use in its plant in Ramallah by 37.33%.
With respect to water, NBC took the initiative of building water treatment plants in Jericho and Tulkarm as they treat the water discharged from Cappy plant in Tulkarm and Jericho plant in Jericho, which are owned by NBC, and distribute this water to the farmers, which contributes in reducing water consumption and recycling of water to reuse it.
During the past years, NBC received many awards at the level of the Middle East and the world. NBC successfully passed the “Top Ten Energy Saving challenge”, which was launched by the Coca-Cola International and the World Wildlife Fund (WWF).  NBC’s business, contribution to power saving, commitment to preserve the environment and natural resources, and its pursuit to improve the efficiency of water use and limiting the climate impacts across the chain of supply were all evaluated.