Under the Sponsorship of the National Beverage Company Coca-Cola/Cappy, Abnaa Al Quds Academy Team starts its activities and demonstrates strong presence in playgrounds 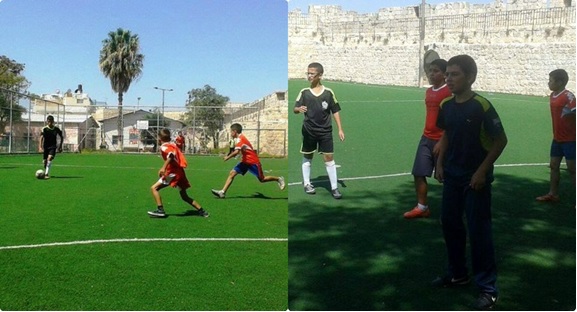 Jawad Abu Gharbia, Chairman of the Board of Directors of Abnaa Al Quds Club, thanked the National Beverage Company Coca-Cola/Cappy (NBC) for its sponsorship of the football school for juniors in the Club, which teach 120 players (males and females) from the youngsters of the Old City of Jerusalem.  He confirmed that the coaches and supervisors in the football school started their work to establish a football school that will provide the Club and other Jerusalem clubs with football players from Jerusalem.  The school is part of the “Old City Neighborhoods” project and within the Special Care Program developed by NBC.

It should be noted that the football school teams played three matches with teams from other football academies. The results of these matches were as follows:
Future Academy vs. Abnaa Al Quds: the match was for players born in 2004 – 2005, and ended in a negative draw. Players who played well in this match include Haris Hijazi, Omar Hijazi, Amjad Dahbour and Anas Jaber of Abnaa Al Quds; and Kamil As-Saadi, Amir Shqairat and Karam Abu Nijmah of the Future Academy.

The second match was for players born in 2003 - 2004, and ended with 3-2 victory for the Academy.  For the Academy, Ameen Za'atara scored one goal and Amir Shqairat scored two goals. For Abnaa Al Quds, the two goals were scored by Mohammed Hijazi And Mohammed Ajlouni.

It is worth mentioning that NBC signed a sponsorship agreement with Abnaa Al Quds Club to sponsor a football school, as a continuation of the Company’s policy of supporting the sports sectors in all governorates of the Palestine, including Jerusalem, which comes at the top of NBC priorities.

Mr. Imad al-Hindi, General Manager of NBC confirmed that the signing of this agreement with Abnaa Al Quds Club for the sponsorship of a football school that comprise more than 120 Jerusalem junior participants of both genders from the Old City was a great achievement for NBC, as a company seeking to protect children and offer them after-school sports programs.

This would contribute to strengthen the resilience of the Club against the problem of scare financial resources that faces Jerusalem institutions, especially sports clubs, given the difficult circumstances that affect the City of Jerusalem as a whole and the fact that the Club owns a grass-covered playground adjacent to the wall of the Old City.

Mr. al-Hindi added that the provision of support for Abnaa Al Quds Club goes in line with the vision of NBC, which aims to develop and promote sports institutions and their various activities, namely to raise a young generation capable of competition and achievement, helping raise the name of Palestine at the sports level, especially that the Club was qualified for the Semi-Professional League and can depend on the professional players trained and prepared by the school. In addition, Mr. al-Hindi praised the strong relationships NBC has already built with sports clubs, especially Al Quds De la Salle, which the Company sponsored for years, as well as the leader of clubs, the Mount of Olive Club and other Jerusalem sports clubs and institutions.