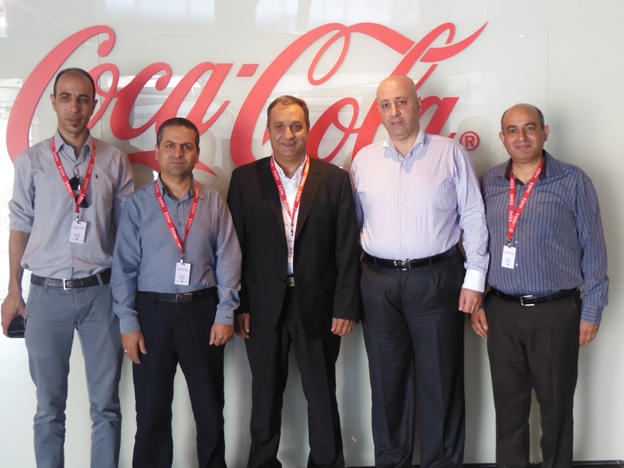 Ramallah- The National Beverage Company Coca-Cola/Cappy (NBC) and Abudees Youth Club signed an agreement whereby NBC will sponsor Abudees Youth Club Football School. The agreement was signed by Imad al-Hindi, NBC General Manager and Ibrahim Jaffal, President of the Club at the NBC headquarters in Beituniya in the presence of Zeyad Bahr, Vice-President of the Club, Salah Badr, Secretary of the Club, Naser Abu Hilal, Cashier of the club, and Alaa Al-Esawi, NBC representative.
Pursuant to the agreement, NBC will cover the logistic and sports supplies and tools needed for the Football School. The Abudees Youth Club Football School receives the juniors in the age group 6 to 10 years. The players are trained by qualified trainers so that they can continue progressing through successive training stages annually. The number of players participating in the Football School is expected to reach nearly 100 players this year.
Mr. Al-Hindi affirmed that NBC will spare no effort supporting the schools which aim at establishing the sporting culture among the Palestinian juniors and youth. “With every team formed and with every sporting school established, we immediately contribute in sponsoring the Palestinian youth and young and junior talents. In NBC, we are committed to support the schools which we believe that if they are provided with the financial and moral support required, they will be able to improve and enhance the potentials of the Palestinian soccer and produce talents capable of competing locally, regionally, and internationally”, he added.
Mr. Al-Hindi commended the distinct partnership with Abudees Youth Club. “We are proud pf having clubs like Abudees Youth Club in Palestine. During the past years, this club has maintained its role and pursuit to cater to the junior and young soccer talents in Jerusalem, developing the skills of Jerusalem youth. We will continue our fruitful partnership which continued during the past three years”, Al-Hindi pointed out.
Mr. Al-Hindi noted that NBC pays attention to the initiatives made by the people of Jerusalem and he emphasized that NBC is keen on supporting the clubs and sporting schools in Jerusalem which proved merit notwithstanding the challenges facing sports in Jerusalem.
On his part, Ibrahim Jaffal valued NBC role in supporting the Abudees Youth Club Football School for the third year in a row. He said: “this distinct partnership between NBC and the club which continue its third year has contributed to the success and continuity of the Football School where 50 players graduated in the first year and 80 students graduated in the second year. We invite the private institutions to take after NBC as it serves providing the local and youth institutions in Jerusalem with their needs to continue their journey”, said Jaffal.