National Beverage Company Coca-Cola/Cappy and INJAZ honor the students of Birzeit and Polytechnic, winners in Ripples of Happiness Program 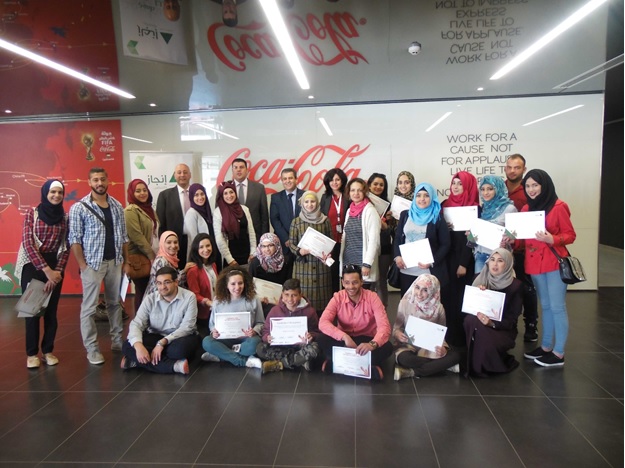 Ramallah- Alhayat Economic- The National Beverage Company Coca-Cola/Cappy (NBC) and Injaz Palestine recently celebrated the honoring of Palestinian university students winners at the level of Arab universities as part of the eighth stage of “Ripples of Happiness” program, which was launched during the last month of November.  Birzeit University attained the first position for its project “Melody of Happiness”, while the Palestine Polytechnic University won the third place for its project “Autism Silent Energy” and the Canadian University of Dubai got second place for the launch of “Understand me”, a smart application designed to serve people with audio and speech difficulties.
During the ceremony, the winning student groups were honored and their projects which participated in Ripples of Happiness program were presented in the presence of Mr. Emad al-Saadi, Regional Manager of the Palestinian Islamic Bank and Board member of INJAZ Palestine Foundation, Ms. Randa Ramahi Salama, General Manager of INJAZ Palestine Foundation, Mr. Imad al-Hindi, General Manager of NBC, Mr. Mohamed El-Ahmed, Dean of Student Affairs at Birzeit University, in addition to the students participating in the contest, representatives of the participating Palestinian universities, volunteering trainee, and local media representatives.
Four Palestinian universities participated in the 8th phase of the program; namely Birzeit University, Palestine Polytechnic University, An-Najah National University, and Haja Andaleeb Al-Amad Nursing & Midwifery College.   Participants in the competition included more than 300 students from 20 universities in six Arab countries: the United Arab Emirates, the Kingdom of Saudi Arabia, Bahrain, Lebanon, Jordan, and Palestine.
The total cash grants amounted to $22,000 presented from Coca-Cola Company. The winners were selected during an official ceremony by a referee committee comprised of representatives of Coca-Cola, INJAZ Al-Arab, and CNN Network. Birzeit University ranked first and was awarded a grant of $10,000 to fund the remaining parts of their project Melody of Happiness, which seeks to establish a free of charge children center to teach music in the Palestinian cities and villages. The students of Palestine Polytechnic University ranked third and received a cash grant of $5,000 for their project Autism Silent Energy, which aims at raising the awareness of the Palestinian society on how to deal with patients of autism.
In his speech during the honoring ceremony, Mr. Imad al-Hindi congratulated the winning students, and he expressed NBC’s pride with the excellence of the students of the Palestinian universities in Ripples of Happiness program. “The Palestinian students proved their excellence in various areas at the international level, especially at the scientific and academic level, which proved the ability of our people to overcome the challenges and circumstances and complete their role to build their communities through persistence and involvement in creating solutions for the societal problems surrounding them”, he said.
Mr. al-Hindi confirmed that such achievements promoted the company to provide further support and assistance for the Palestinian youth, especially in their academic life and development of their competitive and leadership potentials to contribute to creating initiatives that seek to empower their communities and change them for better.
On her part, Randa Ramahi Salama said she was proud with INJAZ Palestine ranking first and third positions at the level of the Arab universities participating in the 8th phase of the program, which asserts the spirit of innovation and determination of the Palestinian youth, how much they belong to their communities and how much they are keen to serve and improve them.
Further, Emad al-Saadi emphasized the importance of community partnership for the Palestinian institutions and companies and he valued the role of Coca-Cola Foundation catering to the youth competencies, instilling the spirit of entrepreneurship, and preparing them to enter the labor market, in addition to creating opportunities of education, grants, and exchange of experiences. He commended NBC’s role and commitment to provide the necessary support for the success of INJAZ programs in general and Ripples of Happiness program in particular.
Mr. Mohamed El-Ahmed, Dean of Student Affairs at Birzeit University, congratulated the students for their achievements noting that “every year Palestine assumes excellent ranks at INJAZ programs at the level of the Arab region which proves the competence and ability of the Palestinian youth to serve their communities and their persistence to change them for the better”. He added: “we trust the positive potential of Birzeit University students and we seek to unleash their creativity which can detect the gaps in the society and effectively respond to them to bridge them by coming out with pioneering projects that improve the social and cultural life standard”.
It is worth noting that Ripples educational program was launched by Coca-Cola Foundation and INJAZ Al-Arab Foundation in 2012 with the objective of training university students to plan, organize and fund social responsibility projects in their communities to make a positive change, learn the arts of social networking and team work, and to gain IT, marketing, and public relations skills.