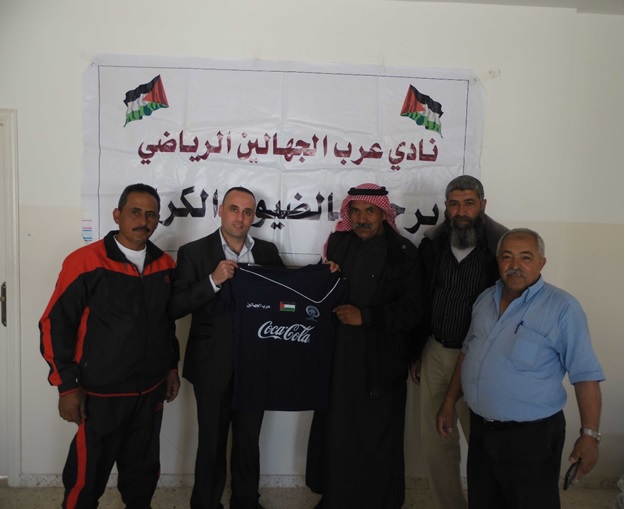 Ramallah  - Al-Hayat Sports - The National Beverage Company Coca-Cola/Cappy (NBC) donated sports supplies to Arab Aljahaleen club in support of the journey of the Club and the efforts of its management to continue developing the Club and the abilities of its players, especially under the overwhelming financial conditions suffered by the Club. The donations included sports clothes and shoes for the players and sports tools that meet the needs of the first team and its trainings.
Mr. Imad al-Hindi, General Manager of NBC, said that NBC presented this support to Arab Aljahaleen Club in line of its social commitment to the citizens living in marginalized areas such as Arab Aljahaleen Tribe, which is one of the oldest tribes in Palestine, suffering hard living and economic conditions and circumstances. “We look forward to support and develop the sport sector in Arab Aljahaleen community located to the east of Al-Aizariya, with a population of more than 3000 persons, by supporting the youth, developing their skills, and creating better opportunities for them so as they can open up to the life and participate in the local and Arab sport championships”, added Mr. al-Hindi.
Mr. al-Hindi confirmed that NBC adheres to continue its strategic approach to support the youth groups in various sectors, especially the sports sector, which is its primary concern, emphasizing that NBC is keen to cater for the excellent Palestinian youth in the remote and less-privileged areas who are not discouraged by hardships from attaining the achievements and successes and being persist to reach the highest levels, which was proven by sports teams and clubs at local and regional levels.
Alaa Esawi, representative of NBC, delivered the sports supplies and tools donated by NBC to Ibrahim Eshtiwi Mazaraa, sports supervisor of Arab Aljahaleen Club, at its headquarters.  El-Esawi expressed the pride of NBC management to meet the needs of Arab Aljahaleen Football Team and contribute to enhancing the players’ resolvetowards broader participation in the local championships.  El-Esawi confirmed that NBC is willing to provide further sports support to the Club, which serves a large group of Arab Aljahaleen youth at various gatherings.
On his part, Mr. Mazaraa commended NBC’s attention to the sports sector and the generous donation presented by the Company. He asserted that the Club management and players are thankful and grateful to NBC management, which responded to their requirements and met their needs immediately as the Arab Aljahaleen youth are sustaining the worst social and economic conditions.
Mr. Mazaraa pointed out that the Club was established twenty years ago to the east of Al-Aizariya area, which is subject to the Israeli occupation where the citizens are marginalized and suffer from poor basic services, while the club management tries to rise up the sports teams affiliated to the Club, namely the first team and the junior’s team. It seeks to provide the players with more facilities through the appreciated support presented by the private sector companies, on top of which is the NBC.