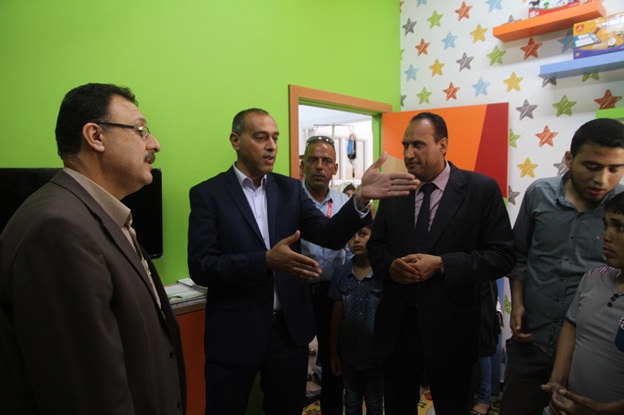 Gaza: The National Beverage Company Coca Cola/Cappy (NBC) inaugurated the third children's library in Gaza Strip following the two children's libraries in Mohamed El-Dorra Hospital in Jabalya and Al-Aqsa Hospital in Deir El-Balah.  NBC opened the new children's library at Al-Shifaa Medical Complex, as part of its ongoing initiative to support the outfitting of libraries for patient children in a number of public hospitals and childhood centers in the West Bank and Gaza Strip.
The opening was attended by Dr. Abdel Latif Al-Haj, General Manager of Hospitals at the Ministry of Health at Gaza Strip, Dr. Hassan El-Khatib, Consultant of transfusion medicine and Head of blood transfusion safety at the Ministry of Health, Dr. Hassan El-Louh, Medical Manager of Al-Shifa Complex, Yasser Arafat, Manager of NBC Branch at Gaza Strip, in addition to a number of blood specialists, the medical and nursing crew, and a number of NBC employees.
The children's library at Al-Shifa Medical Complex is the 11th of its kind at the national level which is furnished by NBC in the public hospitals in the West Bank and Gaza Strip. NBC furnished the library with a group of children's stories and booklets as well as educational and entertainment toys in addition to the decorated shelves and colorful tables and chairs which are suitable for the children in terms of the size, type, and quality. NBC was keen to select the types that conform to the general health, environment, and safety standards. Further, the company provided a TV set, excellent children furniture, and cartoon drawings on the walls that make the sick children comfortable and happy, as well as the library floors which meet the health and safety conditions and standards.
Mr. Imad al-Hindi, General Manager of NBC, confirmed that the library was the 11th of its kind in Palestinian hospitals and the third library in Gaza governorates. He stressed: "At NBC, we are committed to continue out support for the health sector in the various governorates of our state and we look forward to work further on this area at the Gaza Strip to alleviate the suffering of our people there; therefore, NBC will continue supporting public hospitals in the besieged Gaza Strip out of our keenness and interest to develop the medical sector in the Strip and back up all the efforts exerted to bring it back to life, not only at the health level, but also to support the projects which target the children and youth who represent the age groups and those groups that are in the most dire need to get support in the Palestinian society in general and in Gaza Strip in particular due to the repercussions of the siege and destruction inflected in the infrastructure of the sector, especially the medical services sector in Gaza Strip."
In his speech given during the opening of the library, Mr. Arafat asserted that opening of the children's library at Al-Shifa Medical Complex comes in line with NBC's commitment toward supporting the health sector in Palestine and supporting the physicians in their efforts to treat the sick children, and it comes out of NBC's belief of the importance of giving a hand to those children by conferring the atmosphere of playing and fun in the library. He hoped this library would contribute to increase the children response to treatment and using the treatment period to alleviate their pains and boost their mental and psychological abilities.
On his part, Al-Haj thanked NBC for its efforts in establishing a library for children’s blood patient which will alleviate their suffering and help them spend a period that is calm and free of negative impacts in the clinic or the hospital as we provided them with a better treatment environment in the hospital, and now this library adds an environment that is suitable for treating and caring for children’s blood patients and it raises their satisfaction level which will contribute to their treatment.
On the other hand, El-Khatib valued NBC's giving adding that such library will deliver its services to children with thalassemia in the hematology clinics who have this disease since an early age and their only treatment is to continue having blood transfusion. The library is furnished under the sponsorship of NBC in order to contribute to alleviating their stress and reducing their suffering. El-Khatib also thanked all NBC staff and employees who are in charge of furnishing the library hoping for further giving in favor of the patients in all the Palestinian hospitals.
NBC has started its pioneering and first of its kind project in Palestine by furnishing the first library for the sick children at Ramallah Public Hospital. NBC continued its initiative and opened children's libraries in the public hospitals and childhood centers during the past years making the number of libraries today eleven children's libraries including three libraries in Gaza Strip, two libraries in Ramallah, and one library in Beit Gala, Jenin, Jerusalem, Hebron, Qalqilyah, and Tulkarm.