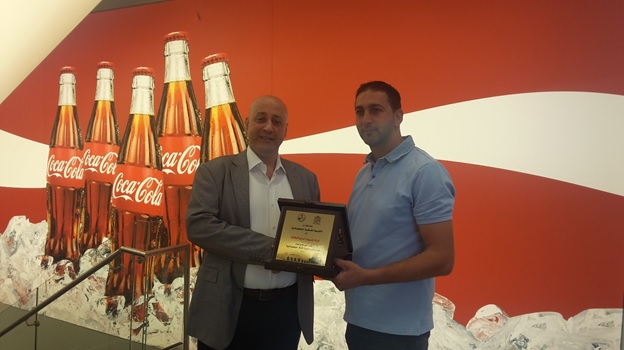 Jerusalem - Pal Sport- Mr. Imad al-Hindi, General Manager of the National Beverage Company Coca-Cola/Cappy (NBC), received at the NBC headquarters in Beitunia Mr. Firas Abu Mayalah, President of the Palestinian Football Talents Academy, in the presence of Alaa Eisawi, Public Affair and Communication Manager in the NBC.  Abu Mayalah thanked NBC for its Silver Sponsorship of the 3rd Jerusalem International Football Cup, which took place in Jerusalem during the period from 7 to 10 of April 2016. Four teams form Jordan, teams from the West Bank and other teams from Jerusalem participated in the event.
Abu Mayalah briefed Mr. al-Hindi on the activity of the Palestinian Football Talents Academy in Jerusalem, which includes nearly 300 players of ages ranging between 7 to 15 years.  He indicated that the Academy plans to open branches in the northern and southern parts of the West Bank in the near future.  He also introduced the women team of the Academy, which played matches in the Palestinian Women's Tournament.  Currently, the Academy seeks to improve the Women's Team after the Capital Girl's Team joined the Academy.
Mr. Imad al-Hindi confirmed that NBC was keen to continue supporting the sports institutions in Jerusalem who proved their presence on the sports landscape in the Capital and in Palestine in general. He affirmed that by following up the activities of the Academy during the past few years, he believed that it has attained achievements at the national and Arab levels by organizing the Arab Jerusalem Championship, which hosts Arab teams on the land of Jerusalem or by organizing the Martyr of Dawn Mohammed Abu Khdeir Championship in partnership with the Jordanian Wehdat Sports Club in Amman, in which Jordanian and Arab teams participated.
Mr. al-Hindi added: "Our commitment comes in line with our support to women sports to establish its position on the Palestinian sports map as part of our projects that support sports in Palestine especially that our country is rich with talents in sports making it our duty to support and promote them".