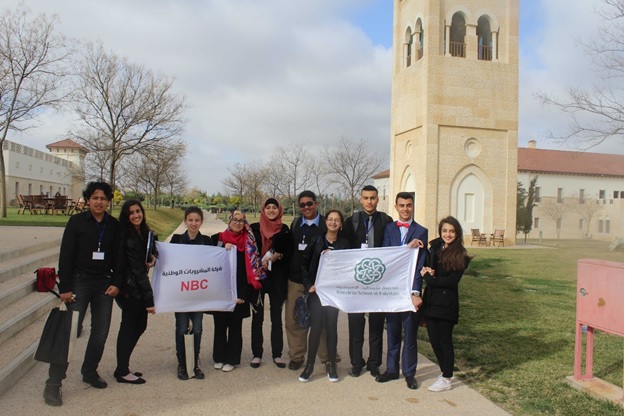 Ramallah- Al-Hayat Economic:  For the second year in a row, the students of the American School in Palestine, with the support of the National Beverage Company Coca-Cola/Cappy (NBC), has participated in UN Council Simulation Conference.  The 10-member student team represented the Palestinian State in the conference that was hosted by King Abdullah II Academy in Madaba, Hashemite Kingdom of Jordan.
The conference, attended by about 300 students from Jordan and Palestine, aimed at familiarizing the students with the functioning approach, dialogue and problem solving methods in the United Nations. The students were distributed over seven of UN committees. Seif Mustafa, 12th grade student at the American School in Palestine, won the title of Best Student at the level of the Security Council Committee in the conference.
Mr. Imad al-Hindi, General Manager of NBC, commended the role and efforts of the American School of Palestine, which recognized the importance of integrating its students in this program to create a young generation aware of national and social issues and capable of leadership.
Mr. al-Hindi affirmed that NBC is committed to supporting the participation of students in international programs that contribute to refining their skills and personalities and helping them learn the nature of functioning of the international forums, as well as methods of problem presentation and dialogue approaches to reach solutions.
He emphasized the importance of integrating the Palestinian students in such events which help them to gain leadership skills and reinforce self-confidence, especially they represent the future leaders and the local community has great hopes on them to achieve change for the better at the various social, economic, and political levels.
Mr. al-Hindi added that NBC’s attention to support the American School of Palestine in its participation in such conference for the second consecutive year is out of NBC’s belief in the importance of developing the personal skills and leadership skills of the Palestinian children in parallel with developing the academic, cognitive, cultural, and athletic skills as all such elements contribute to building an educated generation that has the means and the knowledge that enable them to deal with different issues in the near future, work hard and take the initiative to find solutions.
He expressed pride for the achievement of the students of the American School of Palestine in the conference who honorably represented Palestine and emphasized the Palestinian identity among the participating students which should be encouraged in various activities at the international level.
In their turn, the Management of the American School of Palestine, represented by Mr. Rajeh Mahmoud, UN Model Manager in the school, valued NBC attention to support the participation of the students in UN Council Simulation Conference, noting that such activities and participating in UN model helped the students to a great extent in recognizing the international issues and simulate the UN sessions including the constructive dialogue and finding the solutions.
Mr. Mahmoud noted that the American School of Palestine sought to participate in such model to contribute in producing educated generations who have the knowledge and skills of elocution, dialogue, and leadership, whereas the school seeks to create a generation that can build, handle the problems, and address the national and international challenges to build a better future in Palestine.