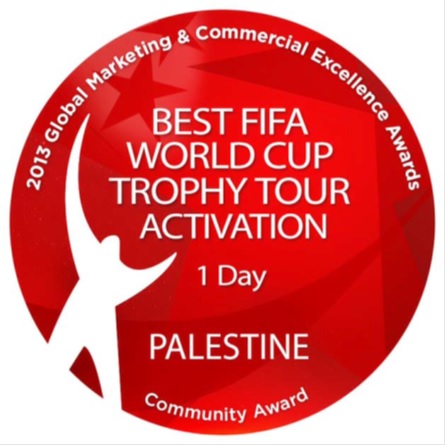 Ramallah - The National Beverage Company Coca-Cola /Cappy (NBC) earned the title of "Best FIFA World Cup Trophy Tour Activation" as part of the 2013 Global Marketing and Commercial Excellence Awards. NBC hosted in its new headquarters in Betonia the original version of the World Cup in November last year during the world tour of the World Cup organized by the Federation of International Football Association (FIFA).  Palestine was the World Cup starting gate to the Arab world. The Company organized several events on the occasion to provide an opportunity for the various segments and sectors of the society to closely know and interact with this historic sporting event in Palestine.
The NBC of Palestine won this title through a vote involving the community of companies affiliated with Coca-Cola International worldwide. The Award is granted to the winner in the category of "Best FIFA World Cup Trophy Tour Activation", which was added to the categories of the Global Marketing and Commercial Excellence Awards’ program for the year 2013.
Mr. Imad al-Hindi, General Manager of the National Beverage Company Coca-Cola/Cappy expressed his pride in the title, which has proven the outstanding status of the Company as a leading Palestinian company at the level of the Coca-Cola International community. "We dedicate this achievement to the customers of NBC and to the Palestinian people who love sports, especially football. By the trust of our customers and this passion by the Palestinian towards football and the World Cup, we managed to raise the name of Palestine and establish its presence on the international scene, especially sports.  Each time we participate in a global event, such as the hosting of the World Cup Trophy in Palestine, we look for the best and most innovative methods to satisfy the tastes and expectations of a sports fan," Mr. al-Hindi added.
Mr. al-Hindi praised the role of Major General Jibril Rajoub, President of the Palestinian Federation of Football and commended his continued follow-up to ensure the success of the hosting event in Palestine for the World Cup Trophy last year, and he added, "We appreciate the care of Major General Jibril Rajoub and his personal support for the success of this important sporting event in Palestine, which is always visible in his support for all sporting events in Palestine, especially his keenness and relentless follow-up to upgrade football and support the Palestinian team that attained today the highest ranks in the region."
Mr. al-Hindi went on to say, "Winning this title by our Company reflects our excellence not only at the level of countries of the region, but at a global level. We were committed to give the opportunity for all football fans and the Palestinian people to participate and be there to watch the World Cup football matches.  We have also endeavored to share our people its passion for the football game, so we continue today to honor this commitment through the “cheer and win” campaign, which offers the grand prize: tickets for five winners and a companion with each winner to attend the quarter-finals of the 2014 World Cup in Brazil."
He explained that the NBC "is keen to be a partner in the development of the Palestinian sports sector in spite of all the obstacles intended to thwart the ambitions of the Palestinian people, especially in the sports sector."
Mr. al-Hindi congratulated the Palestinian people on the achievement of the Palestinian team in the AFC Challenge Cup that qualified the team for the Asian Cup.  He pointed out that Palestine has made a great progress in the world of football, stressing that the NBC will continue to support sports in Palestine and various sports activities in order to ensure the continued progress of this sector and to increase its potentials to participate in international sporting events, in the hope of someday Palestine will participate in the World Cup.