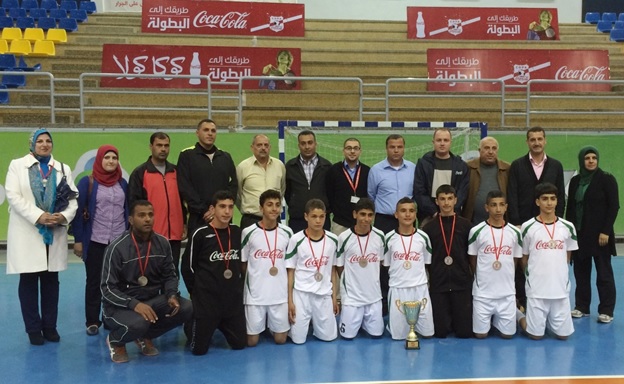 Ramallah – Al-Hayat Sports - The National Beverage Company Coca-Cola /Cappy (NBC) was preparing for the launch of the Copa Coca-Cola Youth Championship at the level of the West Bank, with the participation of 80 teams from the age group ranging from 12-15 years old, after the conclusion of the current tournament organized by the Ministry of Education and Higher Education in cooperation with the NBC for the seventh consecutive year.

NBC announced the completion of preparations for the Copa Coca-Cola Youth Championship for local teams at the level of the West Bank, to be launched in April 24th. The championship will be organized in the Gaza Strip during the summer of 2015.

Mr. Imad al-Hindi, General Manager of the National Beverage Company Coca-Cola/Cappy, explained that the winning juniors’ team at the community level will compete with the winning team in the Football Quintets Tournament for the Education Directorates in a final match at the level of Palestine.

Mr. al-Hindi confirmed that "NBC aims to contribute to the opening of horizons of creativity and excellence for junior youth, as the Copa Coca-Cola constitutes a golden opportunity to build a generation of athletes capable to compete in the World Championships.

In this contest, we have dedicated a championship that embraces young talents under the umbrella of Copa Coca-Cola, as part of NBC’s endeavor to provide an opportunity for those Clubs to demonstrate their talents and refine their skills to compete at the world level, and to provide a platform for the participating groups to experience professional sports through their participation in the Berlin tournament and show the Palestinian talents there." Mr. al-Hindi added that "NBC is seeking through its support for this competition to encourage young men and women to follow a healthy and vibrant lifestyle, and to contribute to instill the values of sporting spirit of competition."

Mr. al-Hindi expressed his pride with the significant response seen in registration for the Copa Coca-Cola by the Youth in the various governorates.