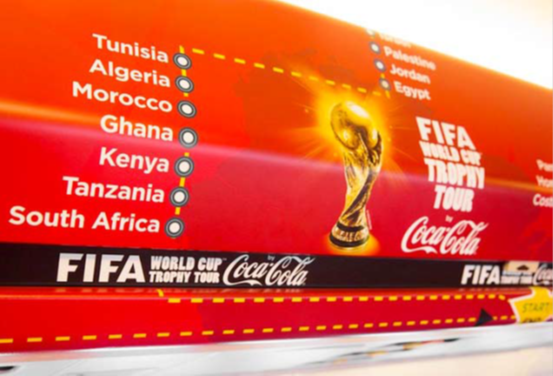 By Munir Al-Ghoul, Sports Editor
Ramallah – The Original World Cup Trophy has recently arrived at Palestine in a tour around the world that will take it to 88 cities over a period of nine months.
Palestine is the first Arab country to receive the World Cup, from where it will proceed to Jordan, Egypt and a number of Arab North African countries.
On this occasion a press conference was held at the new headquarters of the National Beverage Company Coca-Cola/Cappy in Betunia.  NBC was established in Palestine 15 years ago.  Major General Jibril Al-Rajoub, Chairman of the Palestinian Football Federation, members of the FIFA, Zahi Khouri Chairman of the Board of Directors of the NBC, and Imad al-Hindi, General Manager of the NBC delivered speeches in which they addressed the World Cup tour and its importance for Palestine.
The former star of the Brazilian team, Ronaldo (Member of the Local World Cup Organising Committee 2014) was scheduled to accompany the World Cup Trophy, but he apologized and was replaced by the Argentinean Football Player and Coach Gabriel Calderón.  During the tour that started in Rio de Janeiro from the site of Christ the Redeemer Statue on 12th September 2013, the World Cup will travel for nine months around the world before returning to the World Cup 2014 host country – Brazil.  Fans of this sport will be given the opportunity to closely see the original World Cup.   The fans will also be given the chance through activities to be held in each city to take souvenir photos with the Cup.  Such chance will be offered at the Faisal Al-Husseini Stadium and at the NBC headquarters for a period of two days.
It is worth mentioning that the FIFA developed the tour of the Cup in exclusive partnership with the Coca-Cola International, one of the FIFA’s most prominent and long standing partners.
The first time the original World Cup Trophy made an unprecedented tour around the world was in 2006 when it visited 31 cities in 28 countries over a period of three months from 8th January to 10th April 2006 before the World Cup in Germany.
In the second time, the Cup visited 84 countries and 130 cities around the world, including 50 African countries to celebrate the first World Cup Championship held in Africa from September 2009 to May 2010 staring from Ukraine to New Zealand, passing through Kazakhstan, Greece, and Venezuela, in addition to a number of other cities.