Al-Hindi: Jerusalem tops of our priorities National Beverage Company and the Mount of Olives Club Sign an Agreement to Sponsor the Football Academy 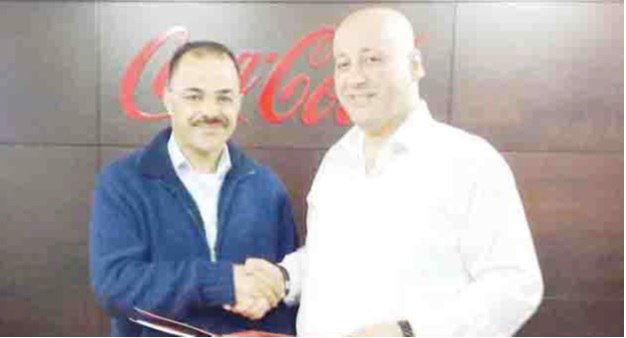 Al-Hindi and Kisswani after signing the agreement
JERUSALEM - Pal Sport Agency – The National Beverage Company Coca-Cola /Cappy (NBC) and the Mount of Olives Club signed yesterday at the company's headquarters in Ramallah, an agreement to sponsor the establishment of a Football Academy to teach grassroots football.  The Agreement was signed by General Manager of NBC Mr. Imad al-Hindi and Mr. Abdullah Kisswani, the Mount of Olives Club President.
The agreement states that the National Beverage Company Coca-Cola/Cappy will sponsor the procurement of all supplies needed by the Football Academy to teach football to grassroots of the Mount of Olives in Jerusalem, including the purchase of various sport tools necessary for training and sportswear.
Mr. Imad al-Hindi, the General Manager of NBC said that the signing of the agreement would contribute to enhancing the resilience of the club in light of the difficulties and  scarcity of financial resources suffered by the institutions of Jerusalem, especially sports clubs due to the tough conditions plaguing the holy city.
Mr. al-Hindi emphasized that the NBC has been always keen to support the Palestinian sports institutions and clubs in the various governorates of the country, especially in the city of Jerusalem due its unique status, in the context of the development process of sports in Palestine.
He explained that providing support for the Club is consistent with the NBC vision that is founded on the advancement and improvement of the sports institutions and their various activities, in order to create a generation of young people and youngsters capable of competing and excelling to contribute to raising the name of Palestine high in the athletic field.
On his part, Mr. Abdullah Kisswani, the Mount of Olives Club, President indicated that “the agreement constitutes a turning point in the development of the sports activity, especially teaching football at the Club.”  He praised the support of the NBC and its efforts to help the Club in light of the difficult circumstances facing the club and other sports institutions in Jerusalem. He said, "On this occasion, I extend my thanks and appreciation to the NBC and its General Manager, Mr. Imad al-Hindi, for this generous sponsorship and unlimited support for the club.”  He hoped that the event would be the beginning for the establishment of a strategic relationship that contribute to the development of the social life for the people of Jerusalem and refinement and enhancement of their athletic skills, and consolidate their presence.
Mr. al-Hindi praised the strong relations developed with the clubs of Jerusalem in the past, in particular the relationship with the Jerusalem De La Salle Club, which the NBC has sponsored for years; as well as the relationship the leader of Jerusalem clubs, Silwan Club, which the NBC has sponsored its Football School last year .