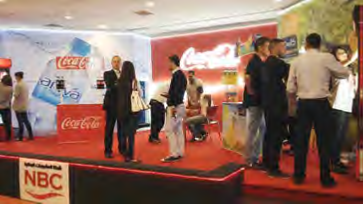 The Coca Cola/Cappy Stand in the Exhibition

National Beverage Company Coca Cola /Cappy Participates in “Ghetha’na” 2013
Ramallah - The National Beverage Company Coca-Cola/Cappy announced its participation in the Palestinian Ghetha’na 2013, which was organized by the Food Industry Union, with the participation of more than 60 companies from various provinces of Palestine. The exhibition took place in the period from 23rd to 26th of September in the halls of Bireh Park in the Governorate of Ramallah and Al-Bireh.
The NBC’s participation in this exhibition was pursuant to the Company's policy that aims at taking part in the various national activities, events and exhibitions to emphasize the high quality of the national product offered and promoted during these events.
In his comments on the event, Mr. Imad al-Hindi, General Manager of the NBC, highlighted the importance of participating in the exhibition, which focused on closely exploring the Palestinian market and marketing the products of the National Beverage Company Coca-Cola /Cappy.    The NBC participation was received with great interest from the participants in the exhibition  and visitors from different regions.
Mr. al-Hindi also expressed his admiration and satisfaction with the level of the exhibition, and confirmed that the exhibition was held to encourage and support the Palestinian Industries, especially as the Palestinian industry has the qualifications and potential to compete in global markets.
Mr. al-Hindi pointed out that “participation in such exhibitions that are close to the public enables the Palestinian products to obtain the consumers’ clear opinion of the products offered to them through the opportunity to communicate directly with the public. He also expressed his appreciation for all the Company's customers for their high confidence in its products and for always choosing NBC products.