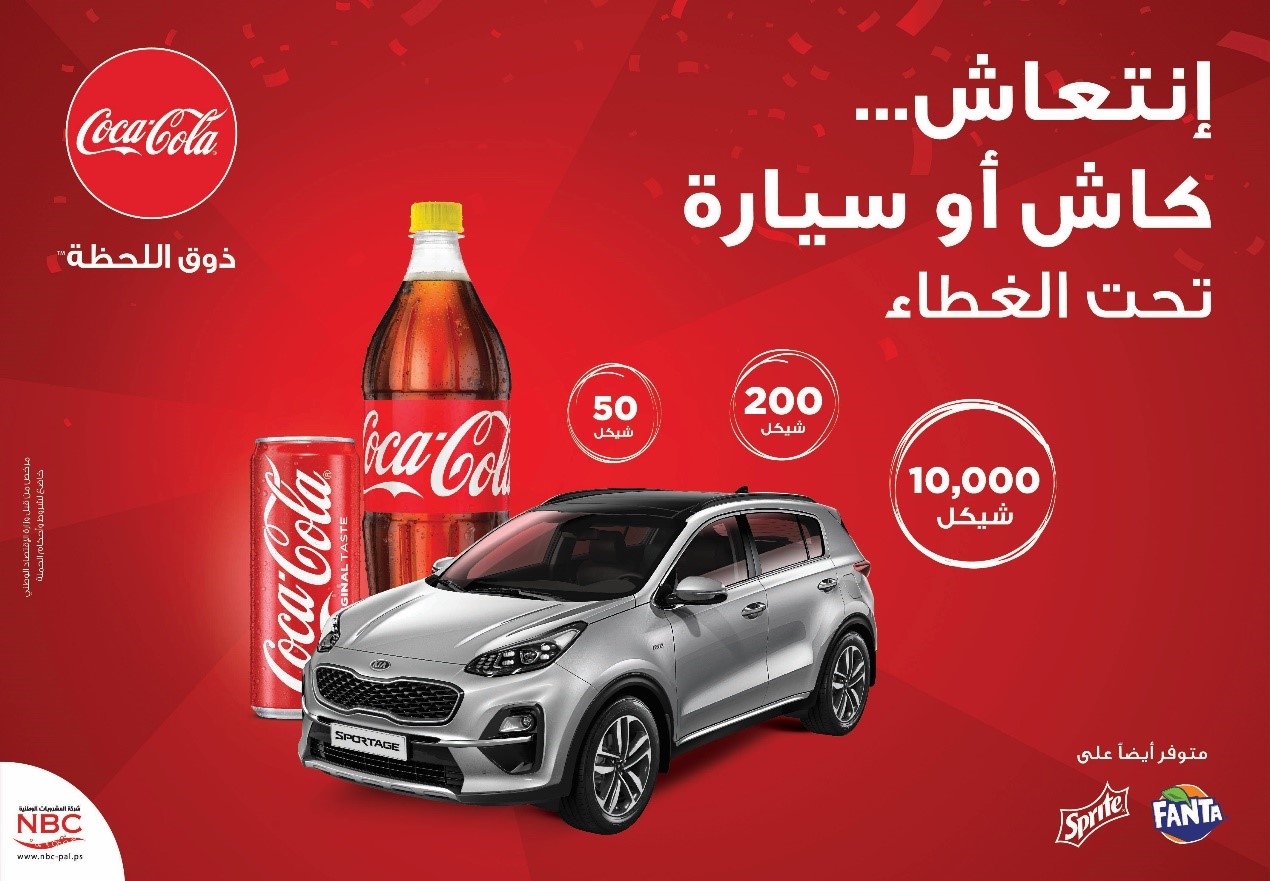 Beitunia- A new campaign themed Refresh and win with Coca-Cola - Cash or Car under the Cap, was launched by the National Beverage Company Coca-Cola/Cappy in earlier of this month in all points of sale in the West Bank and Gaza strip governorates. The campaign includes Coca-Cola, Fanta Orange, and Sprite of 330 ml, 1.125 ml, one and 2 litter sizes. The campaign offers chances to win a number of cash prizes to the consumer who find a value of prize written under the yellow cap which may be 50, 200 or ten thousand Shekels. Additionally, there is a chance to win one of three Kia Sportage cars. The campaign also offers millions of prizes of free products of 330 ml and 1.125 ml Coca-Cola, Sprite and Fanta.
The consumer may exchange their in-kind and cash prizes (50 and 200 ILS) from the announced points of sale in the West Bank, Gaza, or from one of NBC’s branches.  The ten thousand Shekels prize or one of the Kia Sportage cars will be provided at NBC headquarter in Beitunia and at the NBC’s branch in Gaza.
Mr. Imad al-Hindi, General Manager of NBC, said that NBC management is excited about launching the campaign "Refresh and win with Coca-Cola - Cash or Car under the Cap" in the last quarter of this year, confirming that it is a specific campaign and will be widely absorbed by the consumers who are seeking for winning a car or a huge amount of money. Mr. al-Hindi also added that the goal of this campaign is not only to achieve marketing targets for NBC, but also to give the consumers a lot of chances to win different prizes which will help spread happiness among the members of the society.
Mr. al-Hindi also wishes all the best of luck and winning to all consumers in all governorates of the West Bank and Gaza. He thanked again the Palestinian citizens for their continuous confidence in NBC products, their support to the national products, and their participation in raising the market share of the national products versus other products in the market, which help enhance the position of the national economy and provide more job opportunities for the citizens.
About the campaign, Mr. Mohamed Moraqtan, Marketing Manager of NBC, said that this campaign considers one of the biggest campaigns launched by NBC in the market, as it offers number of huge and distinctive prizes, and at their forefront three classes of Kia Sportage cars, clarifying that the distinctive of the campaign is in the type of prizes, as they are considered a rare and valuable on the level of national market.
Refresh and win with Coca-Cola - Cash or Car under the Cap" "campaign will end on the seventh of December 2019. The prizes will be given away in NBC’s headquarter or in any point of sale until the fifteen of December 2019.