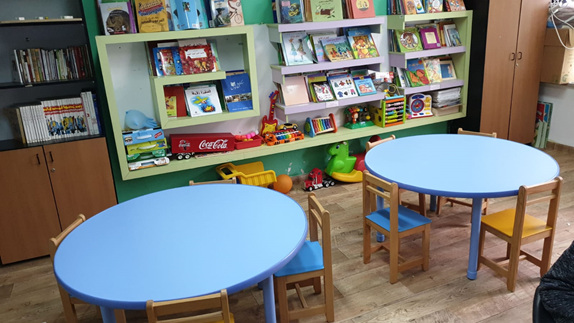 Jerusalem- The National Beverage Company Coca-Cola/Cappy (NBC) donated the rehabilitation of the children’s library at Al Makassed Islamic Charitable Hospital in Jerusalem as part of its ongoing project to rehabilitate and set up libraries in hospitals and health centers.
The donation provided by NBC involved re-flooring the children’s recreational rooms, and providing a set of tables, and educational and recreational toys.
Mr. Imad al-Hindi, General Manager of NBC, said that rehabilitating the library at the children’ section is a part of its social responsibility to provide suitable climate for the children who receive treatment at the children’ section at Al Makassed hospital. He praised the significant development in the hospital in the medical and humane aspects.
Mr. al-Hindi asserted that “Al Makassed hospital is a medical edifice which we are proud of in the city of Jerusalem and that NBC seeks to provide such hospital with every support possible”. Mr. al-Hindi added that NBC rehabilitates Al Makassed hospital’s library for the third time after it rehabilitated this library in 2012 and 2017, as part of NBC’s priority to support the health sector which included a series of eleven children’s libraries and recreational rooms in hospitals and children’s’ societies in Palestine, which have been set up and rehabilitated by NBC in cooperation with the Palestinian Ministry of Health, in various parts across the West Bank and Gaza Strip. The list includes three libraries in Gaza Strip two libraries in Ramallah, and one library in each of Beit Jala, Jenin, Jerusalem, Hebron, Qalqilya, and Tulkarm.
On his part, Dr. Haytham Al-Hassan, General Director of Al Makassed hospital, extended thanks to NBC Management for its outstanding role in providing libraries and recreational rooms for the children in the Palestinian hospitals. He added that such unique humanitarian initiative which has been carried out by NBC for years is a part of its humanitarian role in the various sectors, especially the health sector.
Ahmed Gadallah, Head of the Social Affairs Department at Al Makassed hospital, said that the children’s library in the Social Affairs Department which was set up in the children’ section since 1997 aims at providing a friendly climate for the children to play, learn, and discharge, and to talk with the children who have various diseases and health issues. He called upon the private companies and institutions to provide the necessary support to the national hospitals.