National Beverage Company donates its products and masks to 2,800 groceries and 2,200 restaurants in the West Bank and Gaza 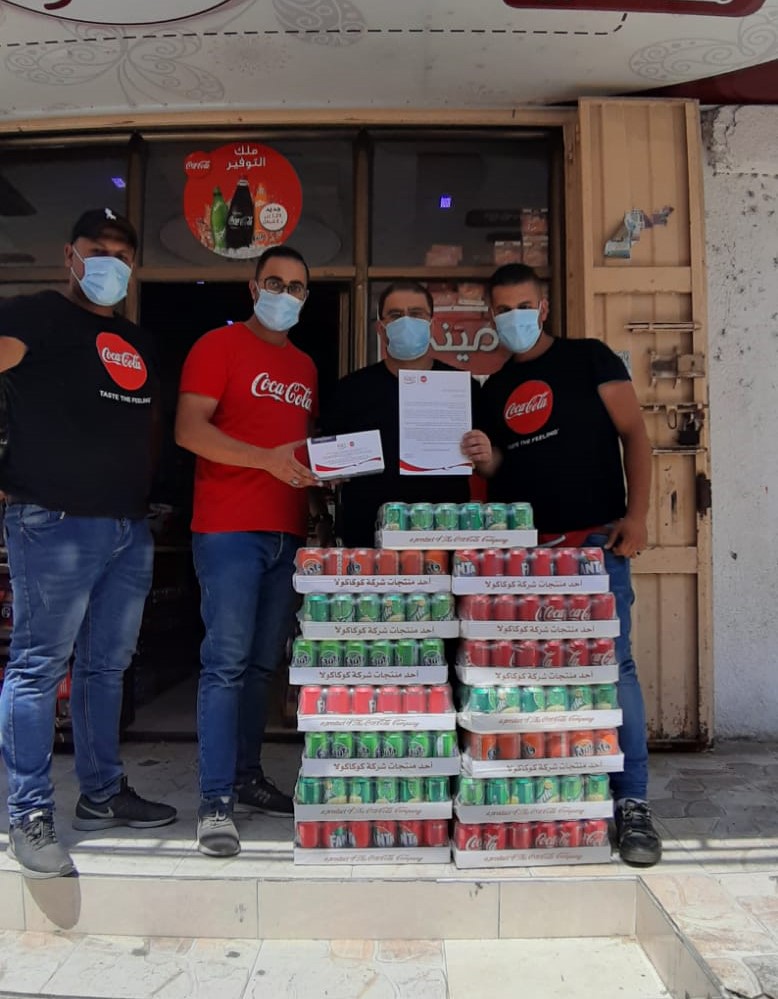 Ramallah - Al-Ayyam - The National Beverage Company Coca-Cola/Cappy (NBC) launched an initiative to support the food retail shops and restaurants sectors. The initiative included the donation of Coca-Cola products in addition to thousands of medical masks through 5,000 points of sale in the various governorates.
The campaign includes retailers, grocery stores, food and consumer stores and restaurants. NBC recently started to implement the initiative and donated the packages of products and masks, which amounted to more than 1.2 million Shekels in value.
The initiative targeted 1,300 grocery, food and consumer stores in the West Bank, and 1,500 stores in the Gaza Strip, as well as 1,700 restaurants in the West Bank and 500 restaurants in the Gaza Strip. NBC has distributed more than 48 thousand boxes containing Coca-Cola cans of 330 ml, in addition to distributing 250 thousand medical masks to the points of sales.
The General Manager  of the Company, Mr. Imad al-Hindi, said that NBC sought through this initiative to support its customers. “In these difficult conditions, we wanted to help our partners who are the owners of stores, supermarkets and restaurants to re-launch and conduct their business after the period of closure and frequent interruption of business due to the pandemic of Corona, which caused them big losses”, he added.
Mr. al-Hindi asserted that the Company though to support its customers, retailers and restaurant owners, in light of the economic crisis that had burdened the retail and restaurant sectors, and led to the heavy losses incurred by many retailers and restaurant owners, especially with the continuation of the outbreak of the Coronavirus and its proliferation in the country.  He added that the donations included medical masks to help the owners of shops, supermarkets and restaurants in providing the means of protection to their customers from infection with Coronavirus.
NBC continues its contributions in support of the local community since the outbreak of the pandemic in the country. NBC has donated its products and food parcels to the local community and chaste families affected by the outbreak of the pandemic, charitable societies, civil institutions, local bodies, camp and emergency committees and tenderness barriers, in addition to donating protective equipment to a number of military medical service crews.   The total donations amounted to NIS 400,000.
In support of the labor due to the pandemic, NBC is preparing to distribute aid and food parcels to the families of the affected workers through a solidarity fund targeting the workers, which was launched by NBC on the initiative of its employees, who donated the salary of two working days in addition to an additional one day salary per employee that the Company has donated.   NBC also donated the salary of three working days for each employee whose salaries are less than six hundred dollars. NBC also donated an amount of One Million, Seven Hundred and Fifty Thousand Shekels to the Waqfat Ezz Fund for the benefit of unemployed workers due to the pandemic, in addition to donating masks, gloves and products to food stores, supermarkets and grocery stores.